The wreck lies parallel to the reef wall on a smooth, sandy bottom 27 —  10 meters below the water surface (the aft mast — 4 m). The bow is well preserved and recognizable. You can take a good look at the anchor and the windlass. The bow is on its side so the mast is sticking out to the side, not upwards. The center of the hull looks like it has been passed through a giant meat grinder. In this part — the most damaged — is a home to a great variety of fish: crocodilefish, lionfish, parrotfish and large moray eels live there in great numbers. The quarterdeck and the stern are well preserved. 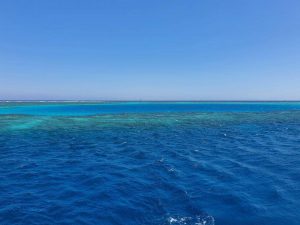 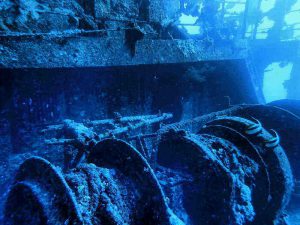 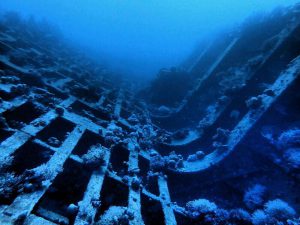 We use an inflatable boat to get to the diving site from the safely moored boat. The waves are strong but the helmsman skillfully overcomes the challenge. We jump into the water directly above the wreck and quickly sink down. We regroup at 5 meters below the surface and continue our journey. During my first visit to this place, the wreck was illuminated with morning sun rays, schools of fish were circling around and this joyful image was engraved in my memory. This time — after 4 pm, the sun is much lower and everything seems a bit dark and gloomy to me.  The stern and the quarterdeck appear enormous. We take a look at the picturesque deck equipment, masts, davits and capstans. We enter the wreck through a hole around 20 meters below the water surface. We will spend most of this dive inside. I take a long look at the lathe in the workshop. Thanks to the Tecline Teclight we are able to communicate and light up entire rooms inside the wreck. 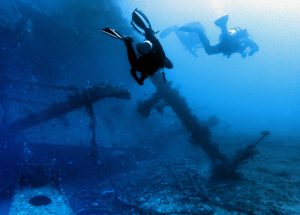 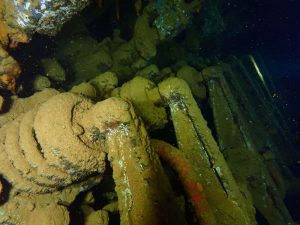 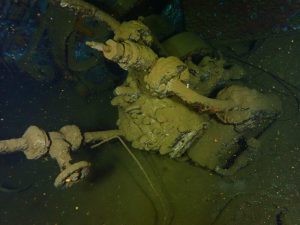 We enter the engine room; this room in Giannis D is well-known as one of the most beautiful diving sites. You can say a lot about its beauty and fascinating equipment. Valves, aggregates, pipelines connected by flanges and thick bolts, the upper part of the engine — we look carefully at all this. We move through the space divided into smaller areas with panels resembling the fence spans made of welded wire reinforcement mats.

Only experienced divers should participate in exploration of the internal rooms of Giannis D, although you certainly do not need to be a cave diver. A relatively regular diver with finished AOWD course with experience in confined spaces and good buoyancy will be just fine. The frog kick is the optimal swimming style here. I’m glad I took the Tecline LightJet recreational-technical fins with me. They look like drysuit fins but they are lightweight and can be comfortably used while swimming in a wetsuit. 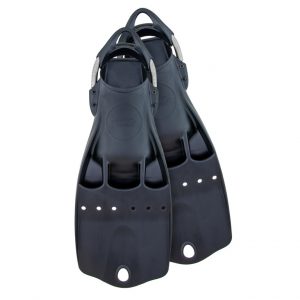 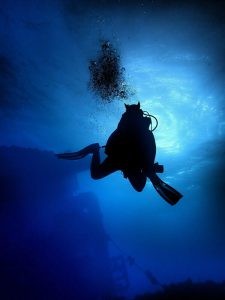 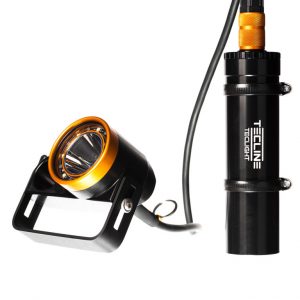 At times, the space gets quite narrow but this turns out not to be the biggest issue. The stern rests on the seabed tilted to the side so everything inside is turned sideways by 45 degrees. This can significantly hinder spatial awareness; sensitive and accustomed people may have issues with their bony labyrinth.  We find a narrow passage in the lower part of the engine room. The diving guide, equipped with a rebreather and stage tanks, has to remove one tank to fit in. He signals us from the other side and we follow. I have the impression that we got across the hull to the opposite side. We swim out through a rectangular opening somewhere on the deck level. We circle around the quarterdeck and make a safety stop after passing the central — most destroyed —  part of the hull. Along the way, we spot divers preparing crossbows for a hunt, it gets darker and we finish our dive.

The waving is strong at 5 meters, once the computer starts to count, I escape down. I’m being careful not to drop below 6 meters because the countdown will restart. I peek upwards and notice the inflatable boat bouncing up the waves. It thrashes around like a wild animal, trying to break free. The tides sweep me left and right, the surface is even worse. I give up on taking pictures, I do not have a retractor and I would rather not drop the camera, which remains attached with Tecline carabiners attached to D-rings of the Peanut 21 harness. In order not to tire myself unnecessarily, I await my turn deeper under the surface.

A Greek from Japan in Egypt

Shoyo Maru was built in 1969 by the Kuryshima Dock Company in Imabari, Japan. In 1975, Yamato Kisen K.K., a shipowner from the land of the rising sun, sold the freighter after six years of use. The new, Greek, owner named the ship MV Markos. After another five years, the ship was purchased by Dumarc Shipping & Trading Corporation based in Piraeus. The vessel was then renamed one last time — to Giannis D.

This sleek general cargo ship was 99.5 meters long and 15 wide, and could carry 2932 tons of cargo. The six-cylinder diesel engine allowed it to reach speeds up to 12 knots. The engine room equipment was manufactured by the Japanese company Akasaka Tekkosho K.K. of Yaizu. Engine power was being transferred to one screw propeller. The ship was equipped with two cargo bays, both located under the quarterdeck.

Giannis D set off on what was to be its last voyage from Rijeki, Croatia. It was loaded with timber and headed for the ports Jeddah in Saudi Arabia and Al-Hodeia in Yemen. Without a sign of trouble, the cargo ship crossed the Adriatic Sea and Mediterrean Sea, went through the Suez Canal and passed the Gulf of Suez. It seemed as though the transit through the Strait of Gubal was going smoothly. However, on 19th of April 1983, just before reaching the safe waters, the freighter Giannis D — approaching the reef Shaʽb Abu Nuħas — suddenly changed course and crashed into its northern wall.

The ship was fully evacuated; the seamen were picked up by an Egyptian tug, which dropped them off at an oil rig. The crew was transported ashore by helicopters. The partially submerged wreck hung on the reef for about six weeks and then broke. The bow remained on the reef until May 1984 when a squall finished the destruction of the freighter by sending this part to the sea bottom. During the check-in, the guide told us that the cargo carried by Giannis D was not wasted. Apparently, the wood was recovered and was to be used in the 80s for building diving boats — as the diving craze started back then in Egypt. Is this true? No way to find out anymore.