WHY THESE DONUTS ARE SO SPECIAL ?

Is there any buoyancy compensator which would
combine all of above features?

Let us tell you a story about the … 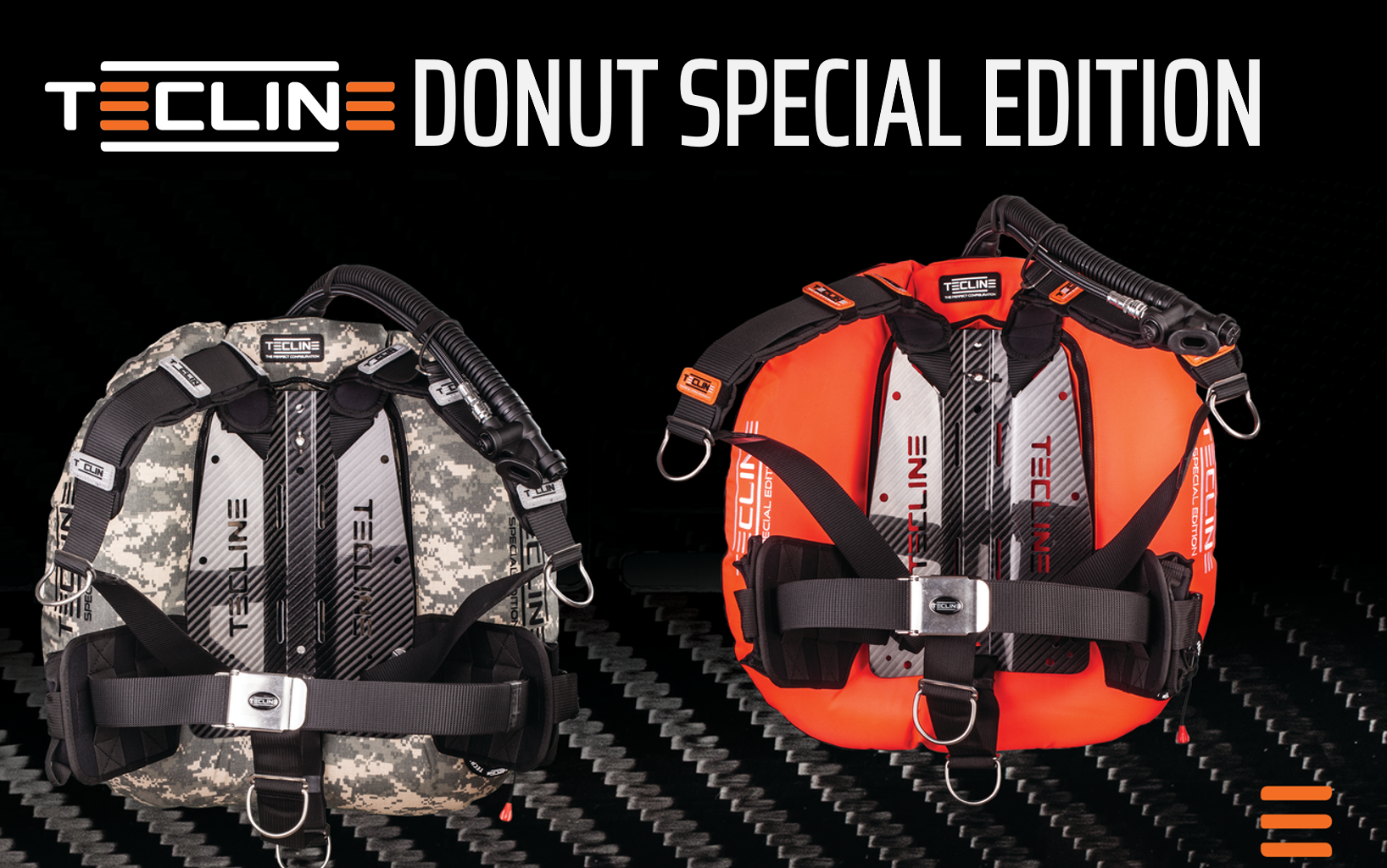 The idea of building something new and more refined was born in 2008.

In that time we started gathering information about the key-criteria of an ideal tec-diving buoyancy compensator. I took under consideration my experience as a diver and instructor as well as the point of view of other instructors and of course – divers.

In the past, I tested many BC’s of various brands. Over years of my professional career I dived with wings in different shapes, sizes, capacities etc. However, I have never found the one which would entirely meet all the expectations mentioned in the first lines of this text. And this was the main inspiration to start working on something new. 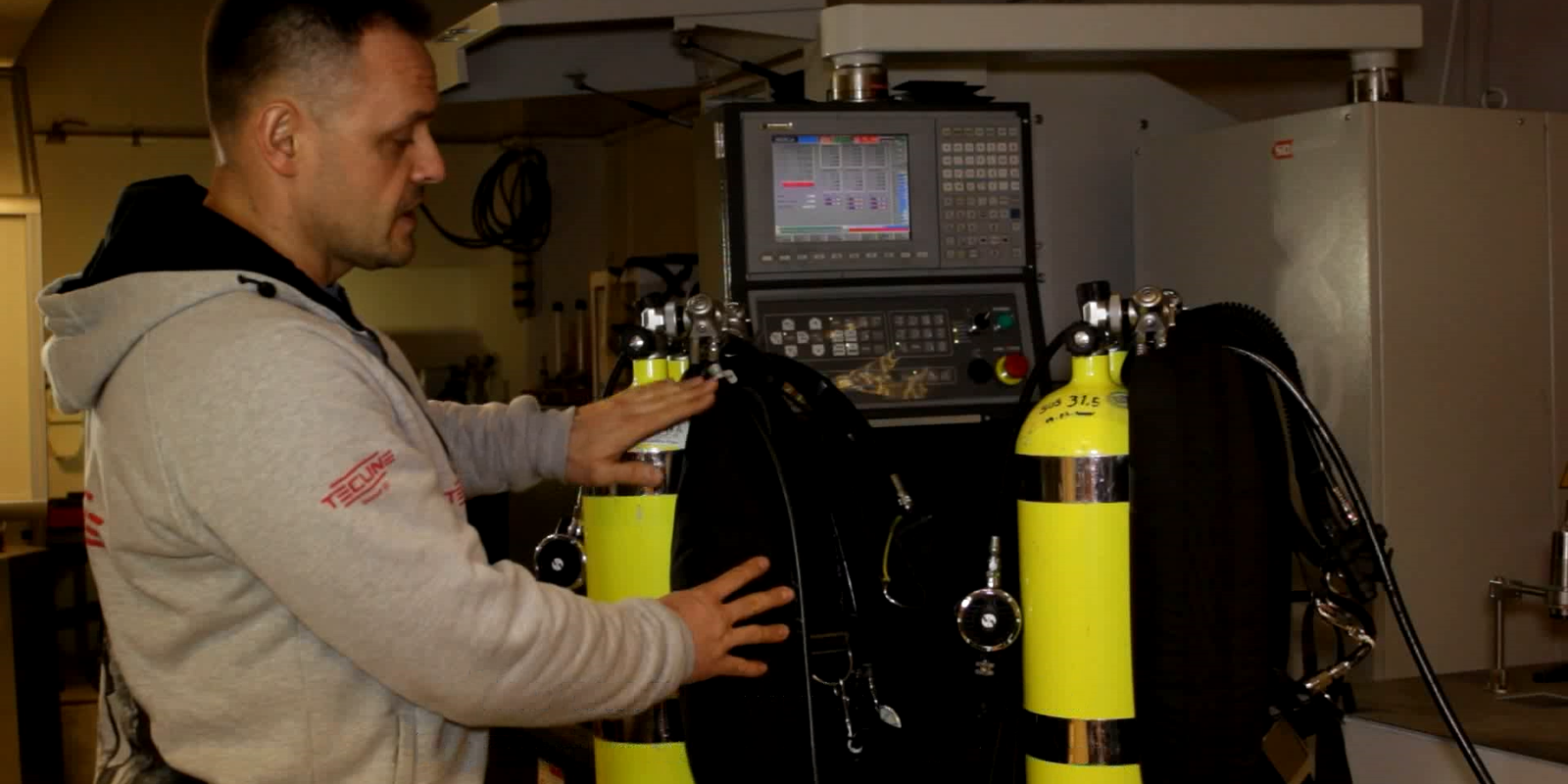 After months of researches, surveys, observations our team started putting down the first sketches. Together with an outstanding constructor – Tomasz Stryjecki we took under consideration opinions gathered by us from instructors, firemen, rescue divers, experienced technical divers, as well as from beginners.

Drafting, testing, comparing prototypes, re-designing, testing again… all the hard work resulted at the beginning of 2011 when we received the final version of the new TecLine Donut 22 Special Edition… 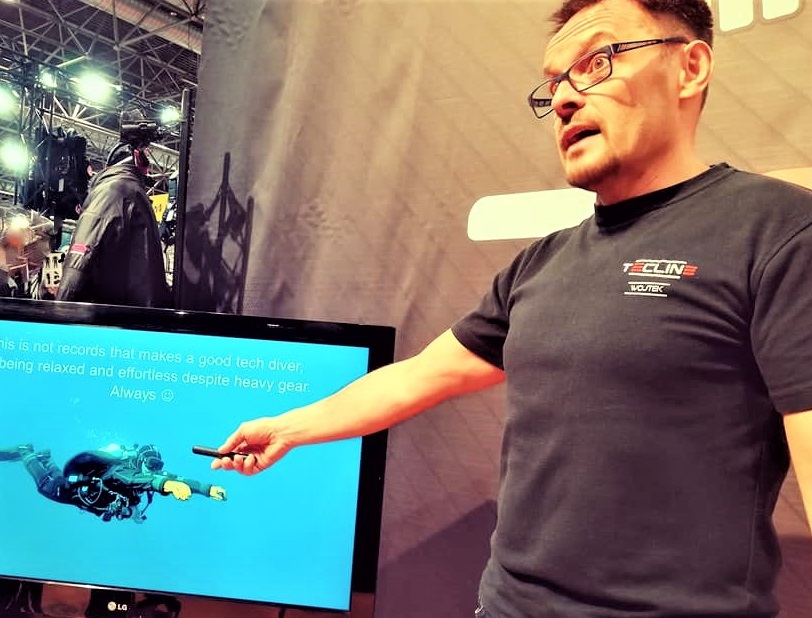 One of the key factors of a comfortable trim is high head position.
Many users of standard wings or donuts often complain about the excess amount of fabric in the upper part of conventional wings/donuts which blocks the head and obstructs the way to configure regulators and hoses. 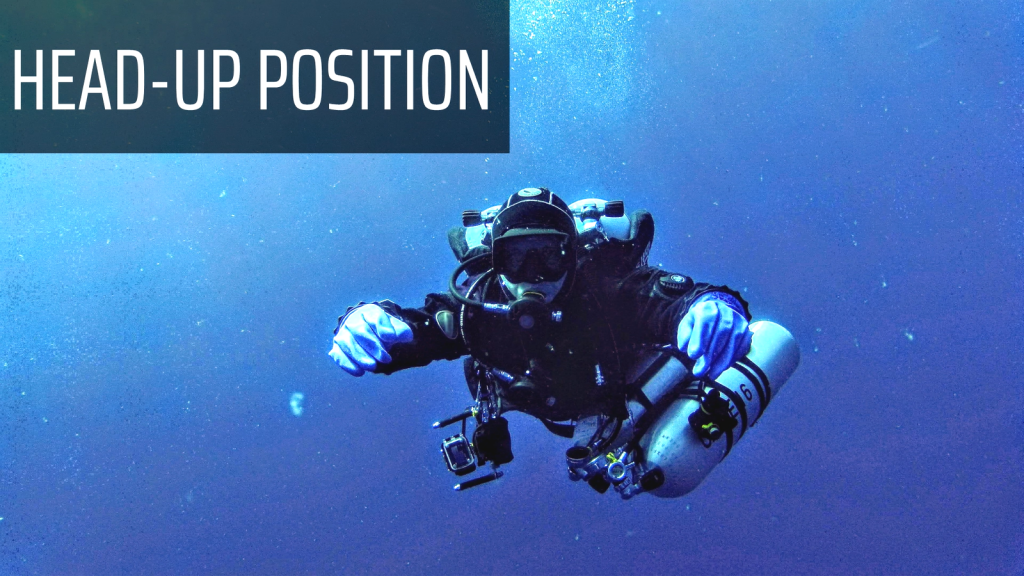 In addition, too much volume in the top section often tends to push diver’s head down when it is fully inflated on the surface…

This is why the top section of the TecLine Donut Special Edition is so narrow.
It significantly helps to achieve: 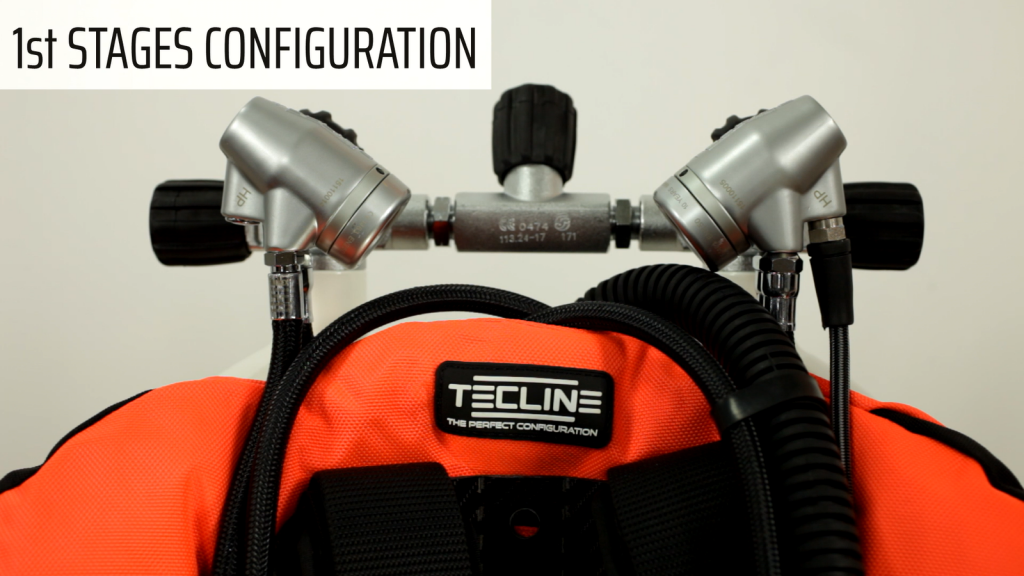 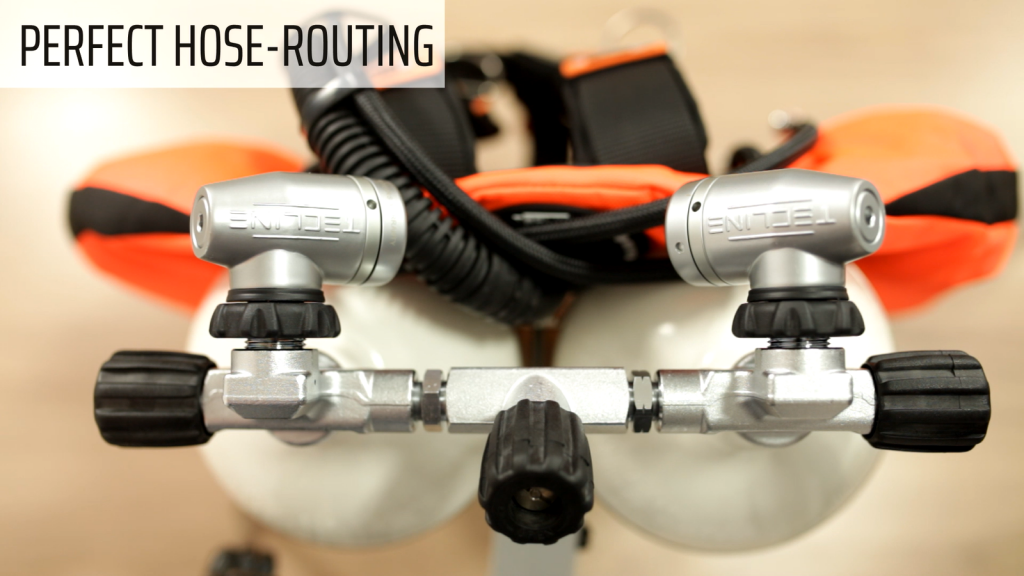 Wide section on the sides and bottom allow for higher, thus safer position of a diver on the surface.

This particular shape of the wing allows to fully use the capacity of the bladder without having the donut protruding from the twintank.

The particular sewing also assures that the active parts of the bladder are never limited by any other pieces of the equipment (tanks, backplate or batteries). 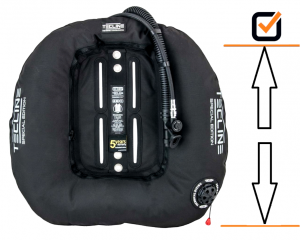 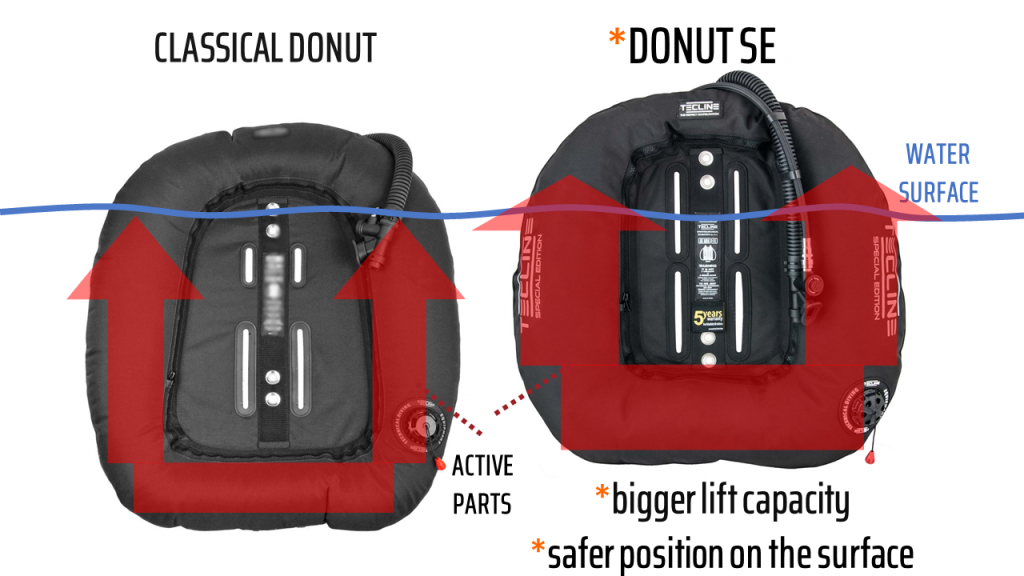 The inflator outlet is located in the highest point of the Donut. It means that the gas is not getting blocked in any part of the bladder. Therefore the deflation is done much more easily. It is sufficient to slightly lift the corrugated inflator hose to efficiently dump the gas.

The dump valve on the rear is also ergonomically and intuitively located. It allows you to easily find and use it without changing your horizontal position under water. 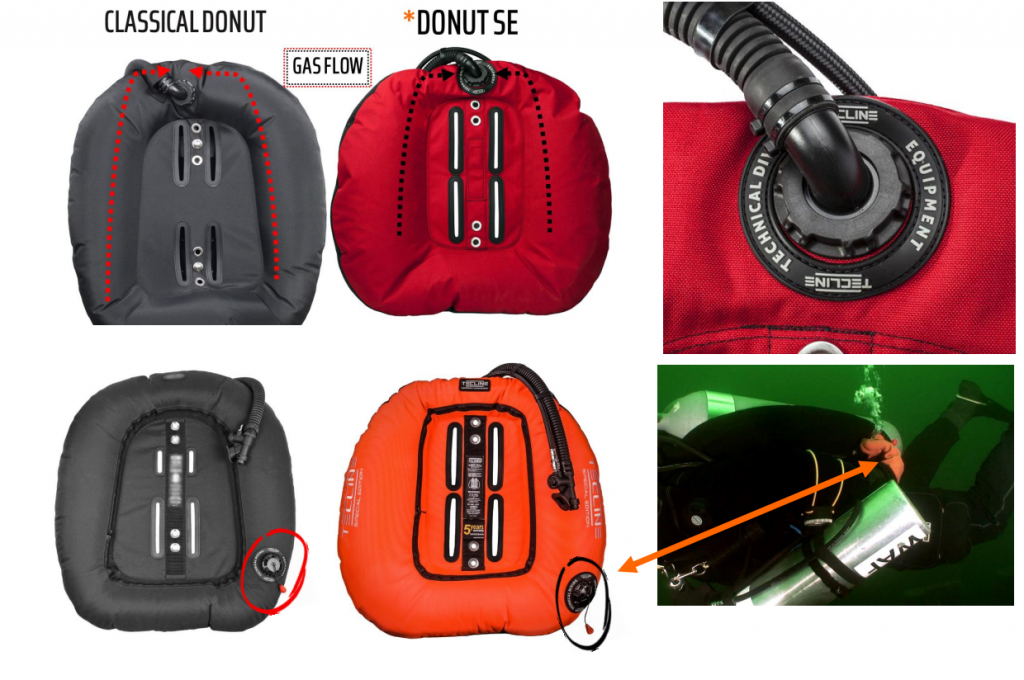 All donuts have 5 years warranty period.

Visual aspect of the diving equipment is also very important.

Not only because each of you have different esthetical preferences but more importantly because of the safety reasons.
After all, we are safer when we can be easily recognisable and visible underwater.

That’s why our Donuts SE are offered in multiple colors:

TecLine Donuts Special Edition are fully compatible with all standard modular systems.
It means that you can either choose from a range of :